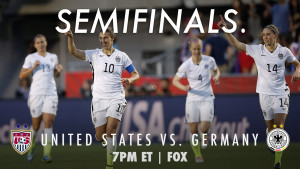 Here we are for the 7th straight World Cup semifinal appearance for the USAWNT.  Let’s take a moment to say, “Congratulations America, that is an awesome achievement!”  While our men’s national team struggles to succeed past the quarters of late, the women remain a world soccer super power.  Kudos to US Women’s Soccer for maintaining a high level of excellence since the first World Cup in 1991!

Now on to tonight’s epic match up with recently crowned world #1, Germany.  By the way, this just happened in December that the US handed over the number one world ranking.  Think that might provide some motivation for tonight’s game? In the infamous words of Tina Fey portraying Sarah Palin, “You betcha!”

I love the USA in this game for one reason…momentum.  They have it at this point in time.  The first three matches their play was sloppy. The Colombia match in the round of 16 was a tough match to critique because Colombia’s backup GK was red carded.  For me, it was the China match, without Rapinoe or Holliday, that the USA put together their best performance.  I watched the game a second time and thought what a blessing it was to be without Rapinoe/Holiday. Morgan Bryan and Kelly OHara played terrific in their place.  The high pressure should be continued and you have to wonder if we could have utilized it sooner.  We dominated China.  I said pre-game that Carli Lloyd needed to step up and well, she did just that scoring a gorgeous header assisted by Julie Johnston.

Conversely, Germany struggled against France and frankly were lucky to win that match.  I love Necib, the player, but she needs to keep her mouth shut and let others say what we all saw….France dominated and outplayed Germany. But soccer can be cruel and they lost in PK’s.  It happens.  Germany has struggled against quality opponents like the 1-1 draw with Norway. (Still the best goal of tourney, imho, was Mjelde’s of Norway.) They have sailed otherwise through lesser opponents which has not helped their momentum factor.

I like the USA to win tonight, 2-1.  It will be tight and the pressure will be excruciating!  The absence of Marozsan for GER will be critical as she is their best MF, if not best player.  The stars seem to be aligning for the USA to meet Japan in a rematch of the 2o11 final.  And wouldn’t that be perfect?  Yes, it would be a perfect final for Abby Wambach to ride off in the sunset with that Cup in her hands.  Restoring the Cup back to the USA, the first since those trailbazers, Hamm & Foudy, lit up the soccer universe in 1999.  A new generation of little girls will be watching and cheering on this team, the 2015 USA Women’s National Team.  Keep inspiring us, ladies!

3 games this week! The Mount MWLax and last LOYWBB game.