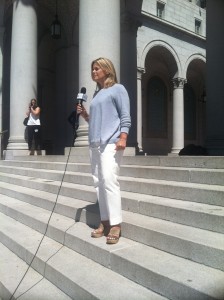 I loved the LA Sparks project because it was about more than a basketball game! It was about a community of women, strong women, who empower one another to break barriers and break records. They are my kind of women, especially Sparks Ambassador Dallas Fowler, who has supported the Sparks from their inception. It was an honor and a privilege to interview her. She embodies the #WeAreStrong #WeAreWomen #WeAreLA campaign.

Dallas mentioned the “posse” of her mother’s girlfriends who empowered her to chase her dreams.  Now, she is mentoring young girls and women to chase THEIR dreams. Her journey has taken her all the way to LA’s City Hall and her influence is greater than ever.  Althea Gibson said, “No matter what accomplishments you achieve, somebody helps you.”  GALvanize is about empowering and helping women chase their dreams of becoming sports broadcasters.

The Sparks campaign has rallied the city of Los Angeles to break the WNBA attendance record but what they are really doing is teaching young girls that they can break barriers & records.

This project felt right from the beginning and I am so blessed to have been a part of it.  Standing on the steps of City Hall in Los Angeles was a moment I won’t ever forget.  I was breaking my own barrier with the help of a group of galvanizing women. 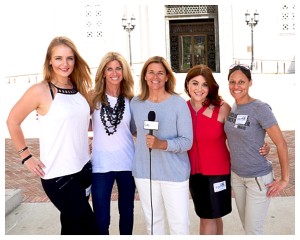